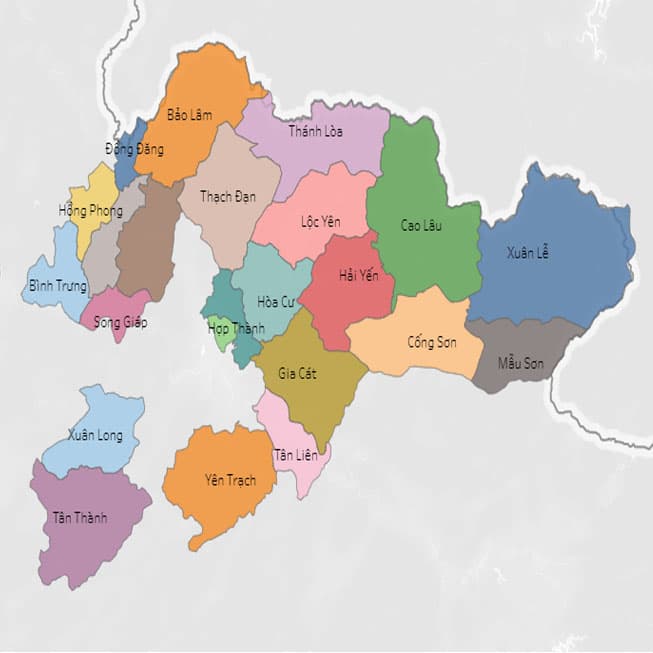 Cao Loc district is located in the northeast of Lang Son province, with geographical coordinates from 22 01′ to 210 46′ North latitude and from 106 37′ to 107 04′ East longitude, the North of the district is the national boundary with the People’s Republic of China, the Northwest borders Van Lang district, the West and Southwest borders Van Quan and Chi Lang districts, the South and Southeast borders with Chi Lang and Loc Binh districts.

Cao Loc district has more than 75 km of border with China, has 2 international Huu Nghi border gate and Dong Dang station border gate, has important pairs of border markets, has international road and rail traffic axes. , National Highway 1A, 1B, 4B, 4A linking with all districts, with Hanoi and the Northern Delta provinces, Lang Son City is the political, economic and cultural center of Lang Son province located near As completely within the boundary of Cao Loc district, this is also a dynamic economic region of the province, so it has created great advantages for Cao Loc district in socio-economic development and affirms the importance of socio-economic development. National Defense – Security is not only for Lang Son, but also for the whole country.

Cao Loc has the highest terrain among the districts of Lang Son province, the average height of the whole district is about 260m. The highest peak is the 1,541 m high Mau Son peak located on Mau Son mountain.

The mountainous terrain of Cao Loc is structured into two massifs: Mau Son mountain in the eastern part of the district and Dong Dang limestone mountain in the West – Northwest of the district. The border strip has a slope towards inland, the average slope is 20-30, the strip adjacent to the area of ​​Loc Binh district (Mau Son mountain) has a steep slope and strong dissection. The area with valley topography is the residence and production of thousands of households in the district.

The average annual rainfall is relatively low, reaching 1,320mm, 70% of the rainfall from May to September, many communes lack water in the dry season such as Thuy Hung, Phu Xa, Hong Phong, Loc Yen. The annual average wind speed is 2.0 m/s. In winter, there is a northeast monsoon, and the phenomenon of hoarfrost occurs strongly affecting agricultural production. The average humidity for the whole year is 82%.

In terms of soil structure, the soil of southern communes of Cao Loc district is feralit soil formed on sandstone and siltstone, distributed mainly on medium and high hill topography. The communes of Mau Son, Cong Son, Hai Yen, Cao Lau and Xuat Le have feralit soils developed on sandstone, clay schist and powdered sand. The communes of Gia Cat, Hoa Cu, and Hop Thanh are ferralite soils developed on ancient alluvial soil. On the territory of Mau Son and Cong Son communes, there exist two types of soil with thin soil layer, soil from acidic to very acidic:

Cao Loc has a relatively thick density of rivers and streams, with the largest being the Ky Cung river flowing through 4 communes. The amount of water in rivers and streams is quite large in the rainy season, but in the dry season, the amount of water decreases sharply, not enough for people’s needs, on the other hand, the flow difference in the year is large, the annual flow coefficient of variation in the area is 0.35. – 0.36, this is a disadvantage in the formulation of water use plans. In the area, there are 75.1 hectares of water surface used for agricultural purposes, 101 large and small irrigation works with an actual irrigation capacity of 1,120 hectares (by design is 1,391 hectares).

According to the assessment of the Department of Geological Management and the Department of Water Management and Irrigation Works – Ministry of Agriculture and Rural Development, the reserve and potential of groundwater of Lang Son province in general and of Cao Loc district in particular are: is not large and the exploitation capacity is very limited because of the difficult terrain, the distribution of population is not concentrated, the rural infrastructure is still limited and the economic conditions of the people in the area are still difficult, so the investment The construction of underground water exploitation works still faces many obstacles.

Cao Loc district has a small forest reserve, diverse plants and animals, many precious medicinal plants and famous specialty fruit trees, but forest resources have been greatly depleted. In 2000, the forest cover rate of Cao Loc district was only 25%. In the past 10 years, the people of Cao Loc district have made efforts to plant more forests and nurseries to increase the economic value of the forest and contribute to environmental protection and environmental improvement. In 2010, the coverage rate was 52%, of which planted forests and nurseries were 20,763.20 ha, accounting for over 70% of the district’s total forest area.

By 2010, the number of people of working age is 40,447 people, accounting for 54.23% of the population, of which 40,293 employees are working in economic sectors, mainly working in agriculture and forestry. The number of laborers who need to create jobs is 1,253 people, accounting for 3.1% of the total number of existing employees, especially in urban areas, the rate that needs to be created is very high, up to 12%.

Labor qualifications are generally very low, the rate of trained workers is 35.67%; workers graduating from colleges and universities is 1.39%, workers with intermediate qualifications acc for 3.63%; Technical workers acc for 2.65%.

Labor structure by occupation: The district’s labor force is concentrated mainly in region I, laborers working in agriculture and forestry occupations acc for a high proportion, up to 77.4% of the total labor force. in industry – construction accounted for 5.77%, service industries accounted for only 16.83%. The average labor productivity of the agriculture, forestry and fishery industry, although it has increased over the years, is still at a very low màn chơi, about 8.21 million VND/labor/year, equal to 37.9% of the average labor productivity of Vietnam. economy. Meanwhile, the average GDP per worker in the construction industry is over 107.75 million VND/year, and the corresponding target for the service sector is nearly 58.62 million VND/year.

In general, the labor force of the district is relatively abundant, with easier access to training and vocational training services, meeting the needs of the immediate development of the economic sectors.

However, the quality of human resources in the district is still limited. Although the number of workers with professional and technical qualifications has increased rapidly (including technical workers, professional secondary schools, colleges, universities, and graduate schools), it is still only about 4% of the total labor force.

Trained human resources are still unbalanced between sectors and levels of training, workers with professional qualifications acc for only 7.67% of the total trained workforce. In addition, because the labor force in the agriculture, forestry and fishery sector accounts for a very high proportion and is of low quality, the restructuring process in the direction of industrialization may create a surplus. labor surplus in the agricultural sector while there is still a shortage of workers in the non-agricultural sector and many negative consequences in job creation, social problems…/.